Books
Hampton Sides / Books / In The Kingdom of Ice 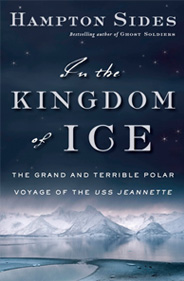 August 2, 2014adminBooks, In The Kingdom of Ice

James Gordon Bennett, the eccentric and stupendously wealthy owner of The New York Herald, had recently captured the world’s attention by dispatching Stanley to Africa to find Dr. Livingstone. Now he was keen to re-create that sensation on an even more epic scale. So he funded an official U.S. naval expedition to reach the Pole, choosing as its captain a young officer named George Washington De Long, who had gained fame for a rescue operation off the coast of Greenland. De Long led a team of 32 men deep into uncharted Arctic waters, carrying the aspirations of a young country burning to become a world power. On July 8, 1879, the USS Jeannette set sail from San Francisco to cheering crowds in the grip of “Arctic Fever.”

The ship sailed into uncharted seas, but soon was trapped in pack ice. Two years into the harrowing voyage, the hull was breached. Amid the rush of water and the shrieks of breaking wooden boards, the crew abandoned the ship. Less than an hour later, the Jeannette sank to the bottom,and the men found themselves marooned a thousand miles north of Siberia with only the barest supplies. Thus began their long march across the endless ice—a frozen hell in the most lonesome corner of the world. Facing everything from snow blindness and polar bears to ferocious storms and frosty labyrinths, the expedition battled madness and starvation as they desperately strove for survival.

With twists and turns worthy of a thriller, In The Kingdom of Ice is a spellbinding tale of heroism and determination in the most unforgiving territory on Earth.

Washington Post
“On a crisp, clear afternoon in July 1879, a group of 33 men known officially as the U.S. Arctic Expedition left San Francisco on one of the most foolhardy missions in the history of exploration: to cruise through the Bering Strait and reach the geographic North Pole — entirely by ship…”

Wall Street Journal
The expedition of the USS Jeannette was guided by a dubious theory that a sea of warm water sat atop the North Pole.

KIRKUS Review – “Another crackling tale of adventure from journalist/explorer Sides…”

Boston Globe
‘In the Kingdom of Ice’ by Hampton Sides

Minneapolis Star Tribune
NONFICTION: Hampton Sides recounts the disastrous journey of the USS Jeannette, which was headed for the North Pole but spent two years trapped in Arctic ice.

Richmond Times Dispatch
“As a species, we seem to have a fascination with last frontiers…”

Imus in the Morning
July 31, 2014
A survival story of polar exploration in the Gilded Age

Santa Fe Radio Cafe with Mary-Charlotte Domandi
August 1, 2014
Hampton Sides Journalist, editor at Outside, and author of several best-selling books including Hellhound on his Trail and Blood and Thunder.

NPR’s Weekend Edition with Scott Simon
August 2, 2014
In 1879, Explorers Set Sail To Solve Arctic Mystery, Once And For All

Wall Street Journal essay by Hampton Sides
August 1, 2014
Why an 1879 Voyage Is a Time Machine for Climate Change

KRCC – Historian with a Novelist’s Tools: An Interview With Hampton Sides

Trailer for In The Kingdom of Ice from DoubleDay

Book TV – Hampton Sides, “In the Kingdom of Ice”